Anne, a Secret Garden customer, shares a favourite tea memory with her daughter!

“This fall I took my daughter to the Secret Garden teahouse for the first time.  It was our special mom & daughter time. We dressed up, put on matching water tattoos and made our way to your new location.

“We enjoyed the decor, the pretty tea cups, mouth-watering desserts and of course the conversation. She’s been asking me when we can go for tea again ever since!”

“Last January our twin ten year old granddaughters came from the Yukon to spend a week with us. We mapped out the week, with High Tea at the Secret Garden, a high point in the week!

“After viewing the whale articulation at the Beaty Museum, we raced home to ‘dress’ for high tea. The girls were so excited!!! One said, ‘I wonder if we will do everything right!’ When we arrived one of the girls asked the server to tell us how to do High Tea, the proper way. The server delighted in the girl’s’ enthusiasm for proper etiquette.

“We had such a grand time together; every conversation since has always included moments from the experience! I love bringing people for High Tea and elegant lunches.”

A long-time Secret Garden customer recently shared some of her favourite teatime memories:

Judith has been a Secret Garden customer since the very beginning. Soon after the Secret Garden opened, her family developed a multi-generational tradition of meeting for lunch at the Garden every Saturday. As Judith’s mother became older and less mobile, this Saturday gathering with children and grandchildren became a very special highlight in her week.

Judith’s family also took their new-found love of High Tea abroad. While traveling in London they visited many well-known spots for tea, including Fortnum and Mason, The Dorchester, and Brown’s Hotel. While each tea was delightful, in the end they decided they actually preferred Secret Garden’s High Tea over the more traditional British High Teas!

“The Secret Garden continues to play an important role in our family life,” Judith explained. “We always attend special occasions including Christmas, Valentine’s Day, and Mother’s Day. Everyone in the family has their favourite pastry!”

Local event planner Kristina at The Swank Social recently visited The Secret Garden for High Tea with her girlfriends. She wrote a review on her blog, sharing,

“The girls and I had the most relaxing time catching up, while slowly sipping on our teas and enjoying our savoury and sweet petit fours.  I can’t even tell you how great it felt to be able to sit back and connect with my girlfriends for a couple hours (or maybe three) without having to tend to requests from my little ones.

“Okay, and don’t get me started on the high tea menu.  As if the mini sandwiches and confections weren’t cute enough, believe me when I say they taste even better than they look.”

Read the full review by The Swank Social

Dorothy (Grandma), Anne (mum), and Kenyon (11 years old) dressed up with fascinators to enjoy their day out for spring High Tea!

Send us a note or tag us on Instagram to share your teatime photos at the Garden!

Many years ago The Secret Garden served High Tea To Go and and other Treats To Go to the Duchess of Cornwall Camilla Parker Bowles, when she visited the VanDusen Botanical Garden. The Duchess liked our treats so much she asked for a “snack pack” to take on the plane!

Hear more about this story and learn about our High Tea To Go in this feature by Global News:

As we prepare for our move we’d like to honour all the people who make Secret Garden possible. This week we’d like to thank our long-time customers for supporting us all these years!

Recently customers Lorraine, Connie, and Catherine visited for their last High Tea in our current location. They said they can hardly wait to enjoy High Tea in the new space!

Oregon-based mystery writer Angela Pepper is a fan of the Secret Garden. She even mentions our popular Creamy Earl Grey tea in some of her novels!

“The Secret Garden Tea Company is one of my favourite places in Vancouver,” Angela explained. “It’s where I take my sweetest friends for tea.”

Angela’s humorous mystery novels go perfectly with a big pot of Creamy Earl Grey. Visit her website or browse her books on Amazon.ca to learn more.

We read every single comment card that you fill out, and we take your feedback seriously. If you ever have any concerns or suggestions, please reach out to us – we’d love to hear from you!

Here are a few sweet notes from guests of all ages:

…and one of our favourites:

We’re still working on that last one! If you’ve enjoyed your visit to the Secret Garden, we’d appreciate it if you could review us on Yelp. Thank you for your support! 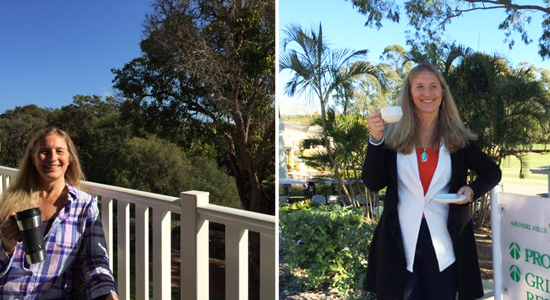 One of our customers, Angela H., loves our Kambaa Black Tea from Kenya. She takes her tea with her everywhere she goes!

In the photos above, Angela is posing with her Kambaa tea in Margaret River, Western Australia (left) and Arundel, Queensland (right).

Do you have a tea story or photo to share? Send us a note!